Realestate.com.au‘s CEO Simon Baker recently penned an article on how consumers in California are more interested in more pictures and virtual tours rather than ‘sexy maps’.

The article written on the recently released Realestate.com.au web log titled ‘News from the CEO Desk’ is a pretty poor attempt at playing down the impending threats of new real estate mapping sites in Australia (and possibly from Google, Yahoo and Microsoft read MSN).

Mapping systems for real estate are relatively new and it will take at least a year for it to kick into gear. There are already a number of sites released with some kind of mapping, but on the whole they are terrible attempts. However this may change with the release of realmap.com.au, of which I have had a good look at.

As for the CEO Blog, it has some nice touches to it and some interesting articles scattered amongst the plethora of chest thumping which seems to ever increasingly come from this well oiled operation’s marketing machine.

Simon Baker takes a swipe and like all clever operators hedges his bet by talking up his “market leading” mapping technology.

I will make a bet. Within 2 years they will dump their decidedly average mapping system for a actual real mapping system developed by mapping experts.

It is not that there is anything wrong with it, it is just that it will be overtaken very quickly by other mapping technologies that are avaiable today!

Having loads of money to spend on technology and development does not necessarily mean you are guaranteed success, as many of Australia’s big business and government agencies can attest to.

So if you get a chance keep an eye on the CEO Blog as there are some worthwhile articles written on it. You can also subscribe to it if you have an Rss reader and even better Internet Explorer 7 Beta release.

REASimon Baker
Tell us if you liked this content. 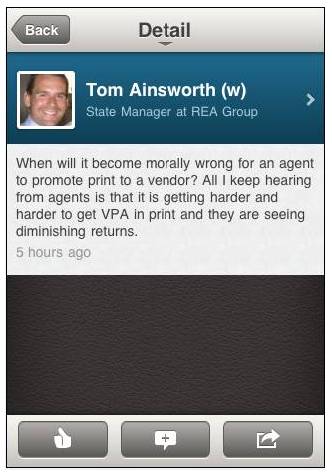 Is it Immoral for Real Estate Agents to Suggest Print VPA?