The ACT Portal market is a little different to others across Australia in that neither Domain nor Realestate.com.au hold the number 1 portal spot. This claim is owned by Allhomes.com.au an independent ACT based company. What Allhomes have managed to do is cement the Allhomes brand into the minds of real estate agents and property seekers across the ACT. So much so, that some residents of Canberra do not recognise the Realestate.com.au or Domain brands. 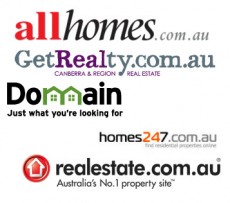 Overcoming Australia’s largest real estate portals is quite an achievement and can be explained by two main factors:

Intensive Advertising – Since inception, Allhomes have heavily advertised through TV embedding their brand in the minds of ACT residents. The advertising campaign was based around a jingle and comedian Vince Chialo and was the same concept for a long period of time. Allhomes also advertise on billboards, buses and other mediums in the ACT.

Niche Market – Although Allhomes cater for properties in the ACT and surrounding NSW, their primary market is the ACT. The ACT is only a small geographic area which basically consists of Canberra, meaning it is relatively easy to reach the entire audience. Unlike for a national or state based portal, Allhomes entire audience reads the same paper, watches the same tv channels, catches the same buses and goes to the same locations. This has resulted in Allhomes achieving excellent exposure through cost effective advertising.

Allhomes’s position is that far ahead of REA and Domain that it’s been reported that both were looking into purchasing Allhomes last year, with one party close to a deal falling over in the eleventh hour.

The success of Allhomes is an Australia portal fairytale in how to launch and succeed with a nice real estate portal. However, like other leading portals, Allhomes continued to squeeze their clients increasing fees steadily over the years (they charge per listing rather than per office). They also have some strict terms in their contracts which agents must abide to including display the Allhomes logo on print advertising, sign boards, window displays and display all listings on Allhomes at a per listing price of  around $495.

These terms and gradual increase in prices led to the formation of a cooperative of ACT agents who launched their own real estate portal GetRealty.com.au in 2010.

The goal of GetRealty is not to make a profit but rather provide ACT agents with an alternative to Allhomes. They’re not about taking the number 1 spot away from Allhomes, rather to reduce Allhomes monopolistic position and force them to act more competitive.

GetRealty hasn’t achieved this yet but is certainly on the way as they have a large number of ACT franchise groups and independents joining the cooperative and supporting the portal. Membership to the cooperative is open to any licensed real estate offices located in the ACT and being a cooperative means all offices are provided with equal rights in the portal.

Around the same time GetRealty was launched, another ACT based portal Homes247.com.au entered the market as well. They too are providing ACT agents with further free alternatives to Allhomes.

Getting set for a mini-mash portal revolution